Didger allows you to convert symbol, polyline, polygon, text, and image objects from your paper documents or imported files into digital format. Every object digitized or imported into Didger has associated XY coordinates that define the object location and can have up to 256 associated attributes. These attributes can be used to assign names, data, or any type of descriptive text to an object.

Didger objects are represented in your project using special drawing properties, such as fill patterns and color. You can control the properties with the Property Manager for each object you create.

Symbols are isolated locations that indicate objects such as well locations, sample locations, benchmarks, and so on. In Didger, polygon markers are a special type of symbol. Post maps, created by importing a data file, also consist of symbols.

The IDs associated with symbols can provide information such as:

This is a symbol with a label.

Polylines indicate objects such as roads, streams, contours, township and range lines, or partial area boundaries such as county or state boundaries that might pass through a map area. A polyline consists of one or more line segments joined end to end. Polylines, unlike polygons, are not closed. The beginning and ending points of a polyline are called nodes, and the intermediate ends to each line segment are called vertices. Polyline nodes are displayed as green (beginning) and red (ending) boxes when the Show Line Nodes box is checked in Tools | Project Settings | Tolerance Settings. Polylines are also called curves or lines. In Didger, spline polylines and wrapped polylines are special types of polylines.

The IDs associated with polylines can provide information such as:

This is a polyline displaying line nodes.

The IDs associated with polygons can provide information such as: 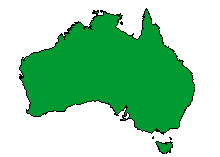 This is an example of a filled polygon.

Text is defined as an object type in Didger and, unlike labels, text is not directly associated with other object types. Text objects are created for display purposes and are not generally used for analysis. The information stored for text includes a text string, the location at which it is displayed, and text properties (color, font, size, etc.).

This is an example of a text object. 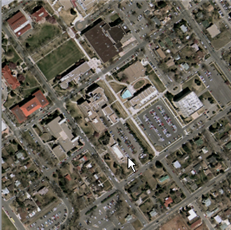 This is an image displaying an urban area.