button, or press CTRL+I on the keyboard to import a file into a Didger project. This command opens the Import dialog so you can select the file to open in Didger.

The Import dialog appears after clicking the File | Import command. 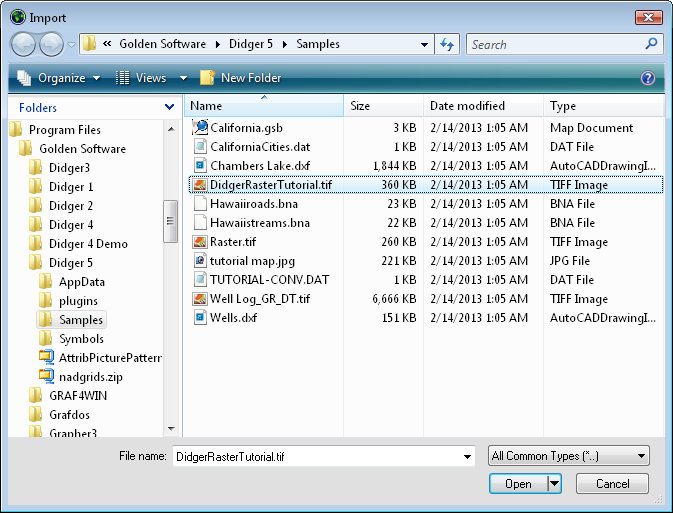 Select a file to import in the Import dialog.

The Look in field shows the current directory. Click the down arrow to see the directory structure and click on the folders to change directories.

The buttons to the right of the Look in field allow you to create new folders and change the view of the file list.

The File name field shows the name of the selected file, or type a path and file name into the box to import a file.

To see all files in the directory, choose All Files (*.*) from the Files of type list. Double-click on a file to open it or single-click the file and then click the Open button. The All Files (*.*) option shows all of the file formats in the current directory, even if the file type is not appropriate for the action chosen.

For a list of all file types supported by Didger, see the File Format Chart. After selecting a file in the Import dialog, an Import Options dialog may appear. Click the

button in the Import Options dialog for additional help on the specific file format options.

When an image is imported, any projection information is automatically imported. The Image Registration and Warping dialog appears, allowing for the reference information to be changed, allowing for an unreferenced image to be referenced, or allowing a coordinate system to be assigned to the image.

When an image, vector file, or data file is imported, the limits will automatically expand. The new project limits will show all objects already existing in the project and all new objects being imported.