ASCII files are generic format files that can be read or produced by most applications. There are three common ASCII data formats: .DAT, .CSV, and .TXT. These files can also be imported into most applications, including word processors, spreadsheets, and ASCII editors.

ASCII files do not contain any worksheet formatting information such as row height, column width, or cell formatting. When ASCII files are loaded, the default column formatting parameters are applied to the data. This does not result in any change to data, but might result in rounding of values in the data display. There is no limitation on the number of rows or columns in an ASCII format. ASCII formats save and load slowly because there is a conversion from binary numbers to character representation.

There are some distinctions in formatting of ASCII files. Here are some brief notes that outline the usefulness of the ASCII file features.

ASCII text files .TXT are normally tab delimited ASCII text files with no quotes around the text strings. After selecting .TXT as the format, the Data Export Options dialog is displayed.

ASCII .DAT files are ASCII files with no set format. Any delimiter or text qualifier can be set. When a file is saved in the .DAT format, the Data Export Options dialog is displayed.

The Data Export Options dialog is displayed when saving a .TXT file or .DAT file. 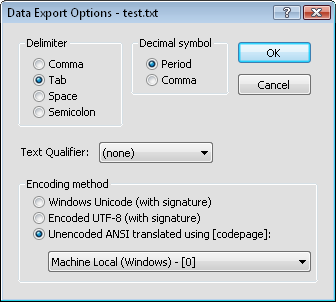 Choose one Delimiter and a Text Qualifier for .TXT